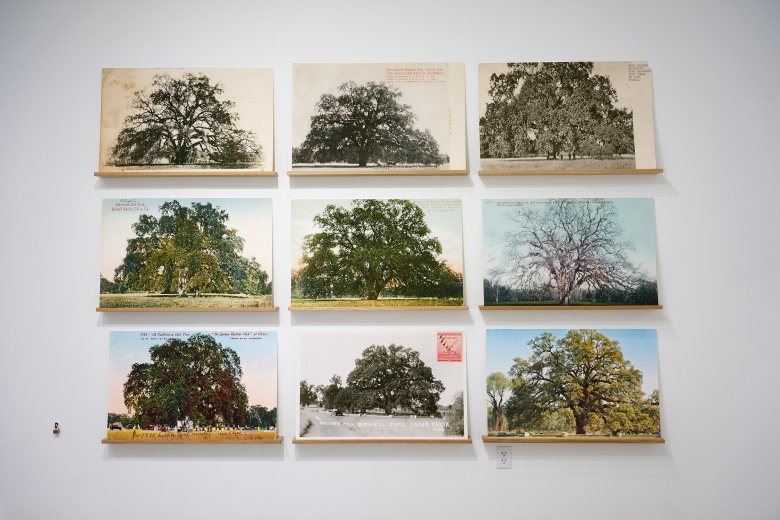 Vanished: A Chronicle of Loss and Discovery Across Half a Million Years is a cross-disciplinary project involving two visual artists, a philosopher, writer, volcanologist, and graphic designer. Collectively, the six collaborators explore four lost icons and consider how we assemble the past through fact, fiction, and myth. The results are an interconnected collection of new and historic photographs, illustrations, sculpture, sound, and writing.

Vanished is located in four locations on the Chico State campus: The Jacki Headley University Art Gallery, the exterior glass cases of the Arts & Humanities building, Special Collections in Meriam Library, and the lobby of the Valene L. Smith Museum of Anthropology.

This project focuses on four vanished icons:
The Missing Mount Tehama: A Vanished Stratovolcano (600,000 B.C.)
Mount Tehama is an eroded andesitic stratovolcano in the Cascade Volcanic Arc and the Cascade Range in Northern California. The combination of continued hydrothermal activity and glacial erosion have removed the central cone of the volcano.

A Return to Deer Creek for Ishi, “the last of the Yahi” (1911 – 1914)
Ishi was the last member of the Yahi, a group of the Yana of California. Widely acclaimed in his time as the “last wild Indian” in America, Ishi lived most of his life completely outside modern culture. In 1911, he emerged at a slaughterhouse in Oroville, CA. 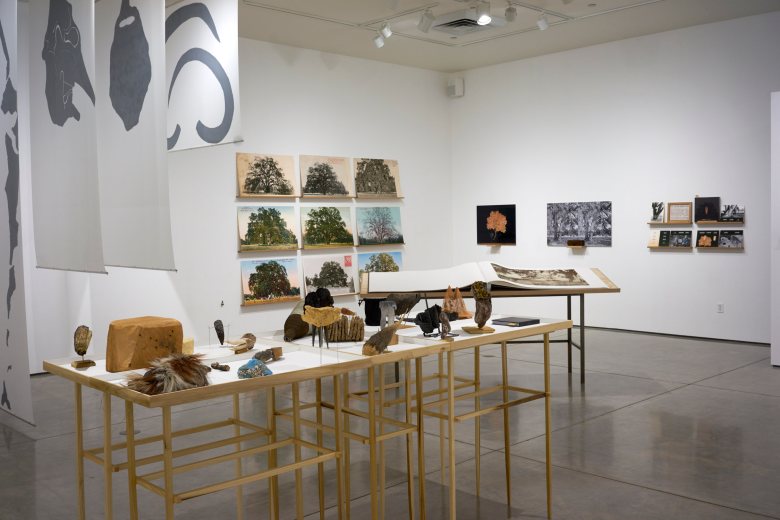 Heather Altfeld, writer.  Heather Altfeld’s first book, “The Disappearing Theatre” won the Poets at Work Book Prize, selected by poet Stephen Dunn. Her poems appear in Narrative Magazine, Pleiades, ZYZZYVA, and many other literary journals. She is the recipient of the 2017 Robert H. Winner Award with the Poetry Society of America and the 2015 Pablo Neruda Prize for Poetry. She teaches in the Honors Program as well as for the English and Humanities Departments at CSU Chico, and she is at work on two more collections of poetry as well as two novels for children.

Oliver Hutton, graphic designer / photographer. Hutton’s work focuses on the design disciplines of packaging and branding with additional expertise in web, environmental, and publication design. His award-winning designs have been featured in Communication Arts, GDUSA, Applied Arts, and other industry publications. He worked for five years at Hornall Anderson: Brand Experience Design Agency in Seattle, WA, before launching a freelance career in his hometown of Chico, CA.

Troy Jollimore, philosopher. Troy Jollimore’s most recent collection of poetry, Syllabus of Errors (Princeton University Press, 2015) was chosen by the New York Times as one of the ten best poetry books of 2015. His other poetry collections are Tom Thomson in Purgatory (Intuit House, 2006), which won the National Book Critics Circle Award, and At Lake Scugog (Princeton, 2011). His poems have appeared in publications including the New Yorker, Poetry, The Believer, McSweeney’s, and Subtropics. His most recent books of philosophy are Love’s Vision (Princeton, 2011) and On Loyalty (Routledge, 2012). His essays are recently published or forthcoming in the Kenyon Review, Conjunctions, Zyzzyva, and he has received fellowships from the Stanford Humanities Center, the Bread Loaf Writers’ Conference, and the Guggenheim foundation.

Sheri Simons, sculptor.  Working primarily in wood, sound, and movement, Sheri Simons’s work has been shown in museums and galleries in the U.S., Canada, Japan, Europe, and South America. She has been awarded grants from the Japan/US Friendship Commission, the Center for Cultural Innovation, the National Endowment for the Arts, and the California Arts Council. She recently completed artist residencies and exhibitions at Youkobo Art Space (Tokyo), and Zentrum für Kunst und Urbanistik (Berlin) where she developed map-related work in drawing and sculpture. She received her BFA from the University of Michigan and her MFA from Cranbrook Academy of Art. Simons is a professor of sculpture in the Department of Art and Art History at California State University, Chico.

Dr. Rachel Teasdale, volcanologist. Dr. Teasdale is a Lantis’ University Professor at California State University, Chico, where she teaches geology. Her current research examines lava flow emplacement mechanisms in a variety of settings, the development of the Tuscan Formation, and monitoring the hydrothermal systems at the Lassen Volcanic Center and volcanoes in Costa Rica.

Byron Wolfe, photographer / project director. Byron Wolfe collaborates on complex long-term research projects with students and colleagues in fields that range from Visual Arts to Humanities to the Natural Sciences. He uses photography and other visualization tools to tell stories that reflect upon broader notions of culture, and the constructions of landscape, perception, and time. To date, Wolfe has authored or co-authored five books and his work has appeared in Harpers Magazine, The New York Times, the Los Angeles Times, Orion magazine, and more. He is a Guggenheim Fellow and his work is numerous permanent collections including The George Eastman Museum, the San Francisco Museum of Modern Art, and the Museum of Fine Arts in Houston. In 2013, Byron Wolfe was appointed as Program Director for Photography at the Tyler School of Art, Temple University, in Philadelphia, Pennsylvania. He was formerly a David W. and Helen E. F. Lantis Professor at California State University, Chico.

The gallery is closed during spring break and the summer and winter sessions.
Loading Comments...